This will likely also delay the delivery of incoming mails up to several hours.

The End of TWIG Webmail

For the last 4.5 years, our customers could choose from two webmail solutions: Roundcube and TWIG. With the introduction of Roundcube we announced the eventual removal of the old TWIG service which hasn’t been updated in years and poses a serious risk in terms of security and spam distribution. Now the time has come to finally turn it off. All remaining TWIG users: please switch to Roundcube, TWIG will be disabled tomorrow, February 5, 2013. 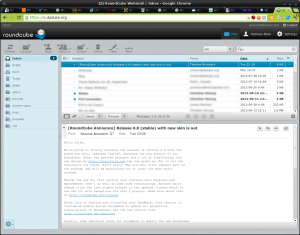 For some years now we have been providing you with the nice webmail solution of the Roundcube project. Last night they released a new major version which we will install

Note that for about 30 minutes you won’t have access to Roundcube. The new version brings a very nice new theme (see screenshot) which we will be enable by default. If for some reason you’d like to keep the old one, you can switch back under Settings -> User Interface -> Interface skin.

On Wednesday, 5th of October 2011, starting at 16:30, we will upgrade the operating system on several servers of our mail server cluster. This will result in temporary unavailability of most e-mail related services we provide: sending and receiving e-mails, mailing lists and webmail access.

Due to the maintenance e-mails may have some lag and arrive a few hours later than usual.

Update, 21:55: Upgrade of the incoming and IMAP/webmail/mailing list servers were successful. Everything is back to normal.

On Thursday, 4th of May 2010, starting at 5pm we will migrate our webmail service to the new mail server. Since there are no version upgrades of the webmail applications Roundcube and Twig, it will be a smooth transition and you shouldn’t even notice the migration. The only thing which can happen is that you get logged out of webmail if you use webmail while the DNS entry changes to the new server address.

This will also be done by switching DNS entries, so you should not experience any interruption nor do you need to change any configuration. However this may cause some temporary issues (e.g. delays) since it does involve new software versions as well as new authentication backends.

Tomorrow Tue September 8, starting from 0730, we will upgrade our Roundcube installation. Expected downtime: about 15 min.

Tomorrow Tue March 17, starting from 0730, we will upgrade our Roundcube installation. Expected downtime: about 15 min.

Tomorrow Thursday Jan 8 at 0730 we will upgrade our popular Roundcube webmail solution to a new version. This will cause a downtime of about 30 min. By way of consolation, we will provide a new theme that looks pretty nice. Look out for it in Personal settings -> User preferences -> Interface skin. It’s called mvision2.