Archive for the ‘Outages’ Category

Update 09:45: the mail server could be recovered. It'll take some time for all queued incoming mail to be delivered.

Early this morning, a RAID controller in the D-PHYS mail server died. We're trying to get replacement parts later today. In the meantime, there's no access to email.
We apologize for the inconvenience.

The Informatikdienste are upgrading the routers in our HIT/D/13 server room causing a downtime of the network of about 1 hour on Thursday morning, 15th September, between 05:30 and 07:30. Please note that various services will not be available during that time.

We had to shut down the D-PHYS mail server on short notice for replacing faulty hardware. Mail service should be back in the evening.

Mails sent to D-PHYS during the downtime will be on hold on the sending side.

As a probable aftermath of last week's power outage we are experiencing some issues with the file system on our home directory server which can only be repaired offline. We therefore schedule a maintenance window

The duration of the downtime cannot be estimated but should not exceed two hours. During this time you will not be able to access your home folder or receive new D-PHYS email. All incoming mail will be queued for later processing.

Thank you for your understanding. 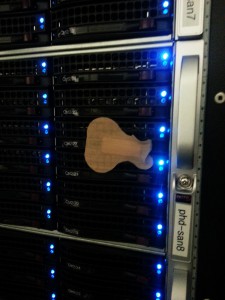 sometimes it just has to work, and fast!

UPDATE Thu 09:30 - all systems should be back to normal. Please let us know if you still encounter problems. Thanks to Axel and Paddy for their commitment and the incredible Dalco service for fixing it within 6h (at 8am, mind you).

UPDATE Thu 00:50 - a broken valve blocked the cooling water in the HIT D 13 server room and all 14 water cooled racks severely overheated (not just D-PHYS). We managed to revive almost all services with the exception of the GGL file shares (this server is dead). We'll post updates later today when we have more information.

complete loss of cooling in the server room. We have yet to assess the damage.

Scheduled power outage in HPT on Mon, May 5 – Limited helpdesk

On Monday, May 5, there will be a scheduled power outage in the HPT building, between 13:00 and 22:00. This will also affect ISG's offices, but none of the servers. Our services will run as usual, but we'll have to move the helpdesk to a temporary location during the outage. So please be patient when calling and wait for your call to be redirected to our pager or write an email instead. We hope to be back to normal by Tuesday morning.

The central network group informed us about a planed network interruption between 6:30 and 7:30 a.m. on the 10th of April 2014 due to maintenance work.

The following rooms are affected by this interruption:

Due to this interruption it may not be possible to access the D-PHYS services and internet from this rooms.

Posted in Announcements, Outages | Comments Off on HPT D and E Floor Network Service Interruption on 10th of April 2014

Due to a test relating the electric power supply of the HIT building there will be a planed interruption from 6:30am to 9:30am on Monday the 15th of July.

Please note that the whole HIT building will be without electric power during this time (The server room HIT D 13 is excluded from this interruption). Shutdown your computer and switch off (use main switch if available or unplug) your electrical devices in advance to avoid local data loss and help prevent start-up peaks when electric power is switched back on.

Last night the regular daily software update on the managed Ubuntu workstations removed the network-manager package. This left most of the workstations unusable. We are working to restore the network connectivity.

We apologize for the inconvenience.

Posted in Outages, Uncategorized | Comments Off on Network Outage of Ubuntu Workstations

Apparently this time they mean it:

On Thursday, February 14, ETH facility services will conduct extensive power network tests in the HPT building, where ISG (and hence the helpdesk) is located. Power will be gone for ~ 2 hours starting around 13:30. During this time we will not be able to answer the helpdesk phone or work on your tickets. We'll post an update when power is back.

Update, 10:30h: We're already offline since in other floors of the building power has already been cut and caused a network outage on other floors.